Denzel Washington and his wife Pauletta are said to be on the rocks, if not over, due to a cheating scandal that has emerged. Photographs of the star with a blonde woman have surfaced and Pauletta is said to have left Denzel. This is so sad as the couple have been married for 30 years and are said to be an ideal couple. Check out the 5 Fast Facts on the photo details, cheating info, and the couple’s present status.

1. Denzel Was Seen Kissing Another Woman

No, we’re not talking about an upcoming movie he’s rehearsing for right now. Radar Online exclusively reports that there is evidence that shows Denzel Washington with a woman other than his wife. He’s kissing her on the lips and the photos appear to be very passionate.

2. Photos of the Mystery Blonde Woman are Currently Being Shopped

There are four photographs that are being shopped around to different media outlets and they don’t paint a pretty picture for Denzel. They show the A-lister:

sitting on a couch with a young lady, and then throughout the series of pictures he grabs her arm and pulls her in for a kiss on the lips in one.

The woman has yet to be identified and the photos have not been verified as authentic as of now.

3. Pauletta is a Secure Wife When it Comes to Denzel

Two years ago, in an interview with Wendy Williams, Wendy asked Pauletta Washington how she deals with all the women who want her man Denzel, and Pauletta replied:

I am secure as to who Pauletta is. My mother raised me in a way to know who I am and actually, he married me for who I am.

We wonder if Pauletta’s singing a different tune now.

4. Cheating Rumors Have Surrounded the Star in the Past

This is not the first time that Denzel has been caught up in cheating allegations. He’s been previously linked to former co-star Sanaa Latham, though she denied the claims.

In fact, on ChaCha.com, we read a quote from Denzel saying:

Being a star and all of that, temptation is all around, it’s all around, you know, and I haven’t been perfect. I’ll be quite candid about it.

This definitely insinuates that there has been some dirty business in the past.

Radar Online also reports that the latest issue of Star magazine has an inside source who dishes on the cheating scandal saying:

Denzel has always sweet-talked his way out of it.

She also adds that wife Pauletta has confronted him, but he denied any wrong-doing. As a result, MediaTakeOut.com claims that Pauletta has left Denzel to live in New York while he remains in Los Angeles. In turn, the two did not spend their 30th anniversary together. If this is indeed true, this is heartbreaking.

Guess we’ll have to wait and see what happens, but we’re crossing our fingers for you, Denzel! 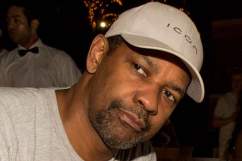 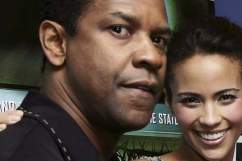