As the series finale nears for the popular television show Dexter, a Showtime executive has already hinted at the possibility of a spinoff, reports Entertainment Weekly.

Showtime Entertainment President David Nevins announced at a Television Critics Association meeting on Tuesday that Showtime has signed a two-year deal with Scott Buck, the executive producer of Dexter. When Nevins was asked if there was any chance for a Dexter spinoff, he answered, “Of course, we announced an overall deal with Scott Buck today. Draw your own conclusions.”

Later on, the executive clarified that there are no actual plans for a spinoff–at least until after the season finale, which airs in September–but left the door open. For now, Nevins said Buck will be working with the premium channel on several new projects.

“There are always things that can be done,” Nevins said. “We have a deal with Scott and we are going to talk to a bunch of different things with him. I don’t know anything. There is nothing real. There’s no sense of whether it will happen, if it will happen, but I want to stay in business with Scott.”

The network did confirm, however, that Buck and his Dexter star, Michael C. Hall, will be working together in an adaption of Matthew Specktor’s novel American Dream Machine. Buck will serve as script supervisor with Hall executive producing.

In the meantime, seven episodes remain until Dexter‘s September 22 finale. 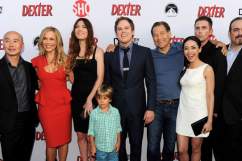