“Nicki Minaj will you marry me?”

Producer DJ Khaled has told the whole world that he is ready to settle down… with one of today’s biggest and most bodacious artist.

Sitting in front of cameras at the MTV studios, the 37-year-old music executive whipped out a massive ring and professed his love to his associate and raptress extraordinaire:  Nicki Minaj.

“I want to be honest with you. I love you. I like you. I want you to be mine,” Khaled says. “The only reason I’m not telling you this face to face is because I know that you’re busy … Nicki Minaj, will you marry me?” Khaled also claims that he originally wanted to propose Nicki last year during the music video shoot for his song “Take It to the Head” ; a single Chris Brown, Rick Ross, Lil Wayne and, of course, Nicki Minaj are featured.

Is this just a crush or will she say yes?

Watch the proposal below: 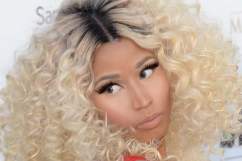