Kensington Palace has announced the official name of the Royal baby to be Prince George Alexander Louis of Cambridge.

The Duke and Duchess of Cambridge are delighted to announce that they have named their son George Alexander Louis.

Predictions on the Royal baby’s name have been circling around the name George.

Via @Ladbrokes: The current odds on the Royal Baby name. George is the favorite at 5-2: http://t.co/OCwp8Klp9h 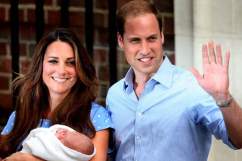