Rapper Tracy Marrow, better known by his street name “Ice-T,” posted a picture worth a thousand words on Twitter recently to prove he’s still sporting the body of a 20-year-old these days. Meanwhile, he’s 55! Check out his tweet below:

It’s only right for every celebrity to take a harmless selfie now and again. Plus, just yesterday Ice posed with comedian Richard Belzer, except he was wearing a shirt this time. The rapper shared a few laughs with the funny man behind the scenes of SVU, according to Twitter. Poppin’ pics left and right, huh Mr. Ice? 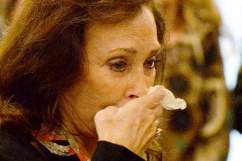