Jason Sudeikis confirmed that the rumors are true and officially announced on The Late Show with David Letterman Wednesday night that he will not be returning to Saturday Night Live in the fall.

The We’re The Millers actor dropped the bomb when Letterman asked him how long someone can last on the sketch comedy show.

“A person can go as long as they want,” Sudeikis said. “Lorne (Michaels) has been kicking butt at it for 33 of the 38 years. But me, yeah, no I’m definitely done. I’m going to leave, I’m not coming back next fall, no.”

Sudeikis’ announcement was nonchalant and almost even sounded a bit cold-hearted. The actor started on SNL in 2003 as a writer and became a featured performer in 2005.

Watch the full interview above.

Rumors began that Sudeikis was leaving the show about a year ago after he hinted at the fact in an interview with Modern Luxury magazine.

“You never really leave that place, and it never leaves you,” he said. “It’s an emotional journey getting through a season, much less the final one.”

The 37-year-old comic is not the only one that is not returning to the show in the fall. Fred Armisen and Bill Hader have already announced their departures and Seth Meyers is leaving to host NBC’s Late Night. Bridesmaids star Kristen Wiig left a couple of seasons back to pursue her movie career. 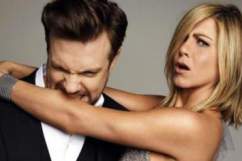