Kate Middleton, the Duchess of Cambridge, has finally gone into labor according to this tweet from Clarence House, the official residence of the Duke and Duchess:

Her Royal Highness The Duchess of Cambridge has been admitted to St. Mary’s Hospital, Paddington, London in the early stages of labour.

The Royal Baby — third in line for the throne, the future king or queen of England — is on its way! Here’s what you need to know.

The “Circle of Life” continues as the long-awaited birth is finally under way as Kate Middleton has gone into labor. Outlets including the New York Times and the Guardian seized on the official tweets from the Clarence House and reported the news that this time, these are not rumors and Kate is indeed in labor. The Royal couple arrived at the hospital around 5:30 a.m. today.

Be careful, Kate. The paparazzi are hungry!

2. Prince William Traveled to the Hospital With Her by Car

The Duchess travelled by car from Kensington Palace to the Lindo Wing at St. Mary’s Hospital with The Duke of Cambridge.

According to Clarence House, Kate and William traveled by car from Kensington Palace to St. Mary’s Hospital. He cannot wait to be a proud father.

3. The World Awaits the Sex of the Baby

The world is celebrating now that the Royal baby is almost here. Nonetheless, the sex of the baby is still unknown and bets are still being made to guess the sex as well as potential names for the Royal Baby.

The New York Post reports the announcement will come through traditional and modern means:

… the first hint will come when a royal aide emerges from the hospital with a signed bulletin carrying the Buckingham Palace letterhead. The bulletin will be given to an official who will be driven to Buckingham Palace, where it will be posted on an easel in public view in front of the building. At the same time the bulletin is posted, there will be an official announcement on Twitter and the media will be formally notified. The document will give the baby’s gender, weight and time of birth.

And even then, it may be a week before we know the child’s name. The paparazzi and the public aren’t the only ones who have to wait on the Royal couple. Though the Royal family will find out the latest news before anyone else, they too must wait.

Guards have been posted on the steps to the Lindo Wing of St. Mary’s. In addition, People previously reported that a “Specialist Search Team” has scoured the area for security:

The squad team inspected trashcans, plant pots and lampposts around the hospital in a thorough security sweep.

Apparently, when making their entrance into St. Mary’s, the Royal Couple went in the secret side door. Very sneaky … We like it! 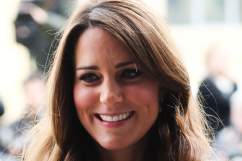