Kick Ass 2 was one of the many movies showcased at Comic Con 2013. Here are five fast facts you need to know.

1. Most of The Cast Was Present

With a few prominent members missing, the first part of Universal’s panel was “kick-ass”. The titular hero played by Aaron Taylor Johnson walked out with his “nemesis” Christopher Mintz-Plasse onto the stage. Director Jeff Wadlow was accompanied by Kick-Ass comic book writers Mark Millar and John Romita Jr as they joined the stars at the table. Newcomers to the franchise including Lindy Booth and Donald Faison rounded out the rest of the panel. Chloe Grace Moretz, who played arguably the most popular character from the first feature, was absent but the actress was able to chat with the audience via video to answer questions. The performers discussed each of their characters journeys in the new film. Fans inquired if the second movie could turn into a trilogy in which both of the comic creators admitted they haven’t wrote a third book yet. Wadlow concluded the presentation by presenting green-band footage to the crowd while announcing a NSFW red-band trailer would surface later that day.

One of the biggest names attached to the project was absent for this annual gathering. Legendary comedian Jim Carrey plays Colonel Stars and Stripes, a leader of a “super-team” called Justice Forever. The comedian has announced he can’t support the movie based on the recent Sandy Hook tragedies. His co-stars were noticeably sad that the star wouldn’t attend Comic Con. Mintz-Plasse and Aaron talked about how excited they were to work with the actor but assured the audience his performance delivers. Carrey will avoid all promotional activities.

The popular magazine helped host a premiere for the cast and crew of the movie. Guests included Olivia Munn, Julie Benz, Lyndsey Fonseca and Kevin Bacon. Scrubs star Donald Faison and Mintz-Plasse jumped around on a bungee cord set up in the middle of the festivities. Towers of flame shot into the air as waitresses dressed as playboy bunnies served guests drinks and promotional items. Spotted in the crowd were various attendees dressed as characters from the movie talking with the stars. Co-sponsored by AXE Black Chill and Patron Tequila, the party was one of the more memorable celebrations at this years Comic Con.

Aaron Taylor Johnson and Mclovin himself got a kick out of seeing fans wearing their various costumes from the movie. Both of the leads loved seeing visitors walking around in green tights. These costumes were pretty popular among the crowd of Wolverines, Batmen and Wonder Women. Chris enjoyed the fact that this controversial superhero flick has inspired so many people. The wild content present in the movie hasn’t suprised Taylor-Johnson. Both actors felt that the risque material helps attract fans and build up that excitement compared to the heroes occupying Marvel’s cinematic universe.

This is one of the multiple superhero movies playing in theaters this summer. Kick Ass 2 is not for kids though. The story picks up from the first film where Dave Lizewski and Mindy Macready training every day to improve their skills. Mindy is formally retired as her alter-ego Hit Girl but has to deal with the terrors of high school. Dave’s crime-fighting adventures have caused other people to dress up and protect their neighborhoods. Mintz-Plasse returns as Chris D’Amico seeking vengeance for his dads death. D’Amico reinvents himself as “The Motherf**ker and builds a team comprised of villains to wreak havoc. That’s all we know. The first movie was a modest hit so expect the second to be the same. 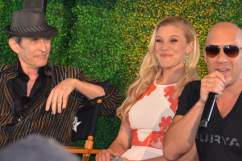