The Royal baby’s name has been announced as George Alexander Louis. Check out all the info on the name choice including origin and reasoning, as well as the future of the new heir to the Royal throne. 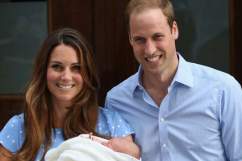 1. The Royal Baby Will Be Known as His Royal Highness Prince George of Cambridge

Well, isn’t that a mouthful. After two days since the birth of the Royal baby, the name has been announced by Kensington Palace after a statement from Prince William and Duchess Kate arrived.

The baby will be known as His Royal Highness Prince George of Cambridge.

The Royal couple has precisely 42 days to register the baby’s birth and name in person at the town hall, but we’ll see if Britain makes an exception for George Alexander Louis.

2. This Name Was the Fan-Favorite

For weeks up to the birth of little Prince George, the world took polls and placed bets on possible baby names. George was actually the top pick.

George: Royal Baby's Name Is Revealed – I guessed correctly!!! I should have placed a bet, dammit!! http://t.co/XFVOqmMK3g

3. The Royal Baby is Named After the Queen’s Father

As a tribute to the memory of the Queen’s father George VI, the future king was given the name George. George VI was apparently the founder of the House of Windsor and the last king of England to be crowned. Once little George Alexander Louis becomes king, he will be the 43rd English monarch in history.

Great grandmother Queen Elizabeth II actually popped over for a short visit to meet the new heir to the throne earlier today.

Prince Philip’s uncle Lord Louis Mountbatten is the reason for Louis to be included in the name choice. Supposedly, Mountbatten was also a strong mentor to Prince Charles, who was devastated when Mountbatten was assasinated in 1979 by the IRA.

Mountbatten, the earl who was an uncle of Prince Philip and a strong mentor-like influence on the young Prince Charles, who was devastated by his 1979 assassination by the IRA.

5. The Origin of Alexander is Under Debate

There are several opinions when it comes to where the name Alexander came from. USA Today notes:

Alexander could be either a reference to old kings of Scotland, or it’s the male version of Alexandria, a top girl name contender and the name of a past queen consort and one of the baby’s ancestors.

Alexander was also one of the top names that British locals bet on … aside from George of course. The Washington Post researched that:

Alexander, which was polling high among those betting on potential baby names, has older resonance, going back to 13th century kings of Scotland. It is, however, the trendiest of Young Cambridge’s names, at least in the U.S.: According to Social Security data, it was the fourth most popular name for American boys in 2009 and remains in the top 10. Also: It’s one of the names Queen Elizabeth II was given at birth — Elizabeth Alexandra Mary Windsor — in honor of Queen Alexandra, her great-grandmother and the wife of King Edward VII.