Adding a new name to the Kickstarter craze, Spike Lee began his campaign to find funding for his new movie. The prolific filmmaker set a goal of $1.25 million to produce a story revolving around people addicted to blood.

Spike Lee is famous for his spirited courtside behavior at Knicks games. Now you can join him if you throw a $10,000 “blood” donation to his Kickstarter. (Getty)

In order to quickly fund the untitled project, Lee is offering incentives to various donors. Charitable people who donate $10,000 to the project can have dinner with Spike and watch the Knicks play from his courtside seats; $5,000 will earn an associate producer credit, while more frugal fans who contribute $5 will get a simple thank you.

Lee’s motivation for heading to the popular crowdsourcing site is his “frustration” with the studio system. Tired of the same superhero movies and tentpoles, the maker of Do The Right Thing hopes that fans would prefer to see a movie about people connecting on a human level. Today marks Day 2 of the 30-day campaign, but it’s performing well so far — 559 backers have pledged $89,904 with 29 days left to go. Check out Spike’s pledge video below. 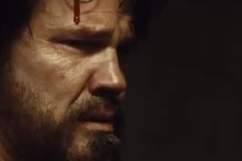