Author of the Harry Potter series, J.K. Rowling poses with the cover of her first adult novel, “The Cuckoo’s Calling.”(Getty Images)

J.K. Rowling sure hasn’t been slacking since she finished writing the extremely successful Harry Potter series. Last year the author published her first adult novel, The Casual Vacancy, and although the book did not receive the best reviews, it still sold more than 2.5 million copies. Now, it was leaked over the weekend that a book that’s been on the shelves for nearly four months called The Cuckoo’s Calling was written by Rowling under the pseudonym Robert Galbraith.

It was leaked over the weekend that author of the Harry Potter series J.K. Rowling had published a book called The Cuckoo’s Calling under the pseudonym Robert Galbraith. The book’s publicity materials describe “Galbraith” as a military veteran writing about his own experiences.

The book is centered around a war veteran turned private detective who investigates the suspicious suicide of a young supermodel in London.

3. The Sunday Times Was Tipped Off by an Anonymous Tweet

What I have to say about being Robert Galbraith and writing 'The Cuckoo’s Calling': http://t.co/glyGBv1x2n

The Sunday Times of London was tipped off by an anonymous tweet that Rowling was the true author of the book and the author and publishers both confirmed that it was true. Some were suspicious that the leak was just a publicity ploy, but Rowling’s spokeswoman, Nicky Stonehill, made a brief statement denying those claims.

“We can confirm the story in The Sunday Times was correct, and it was not a leak or elaborate marketing campaign to boost sales,” she said in an e-mail on Tuesday. “We are not commenting any further.”

4. Book Sales Skyrocketed When it Was Leaked

The Cuckoo’s Calling received generally good reviews before it was known that Rowling was the true author, but was just starting to fade away. Once it was leaked that Rowling was the true author of the book, its sales skyrocketed. The book at first had only sold 500 copies in the United State since it went on sale in April, but suddenly became the summer’s hottest book.

5. Rowling Said Writing Under a Pseudonym Was Liberating

“I hoped to keep this secret a little longer, because being Robert Galbraith has been such a liberating experience!” Rowling said in a statement. “It has been wonderful to publish without hype or expectation and pure pleasure to get feedback from publishers and readers under a different name.” 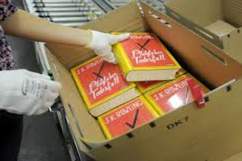