Just this morning around 8 a.m., 50 Cent was due for an appearance in court regarding domestic violence against his baby mama Daphne Joy in L.A. on June 23, 2013.

50-Cent will be in court today. Accused of attacking his ex and trashing her condo. He faces up to 5 years in prison and $46,000 in fines.

As we previously reported, the charges included physically abusing the model and destroying some of the property in her room. According to Globalgrind, the notoriously angry rapper caused a total of $7,100 in damages. However, as reported by hotnewhiphop, 50 went to court this morning to prove that the accusations of physical violence against Joy are false.

According to tweets, if convicted of his charges the rapper is looking at five years in prison and $46,000 in fines. 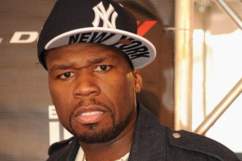 Do you think he will be convicted? Stay tuned to hear 50 Cent’s fate!