Oops, X Factor’s Simon Cowell got caught! Where? Smack in the middle of the divorce between Lauren and Andrew Silverman when he got a shout out in the divorce papers… kind of. 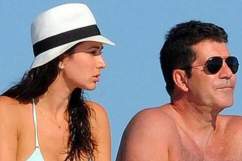 According to the National Post his name was mentioned as one of the reasons behind the divorce, citing “adultery.” So, is Simon Cowell a home-wrecker?

TMZ gives some details on the divorce documents saying:

In the docs, Silverman, the plaintiff, lists Lauren as a defendant and Cowell as a co-respondent.

In addition, Silverman’s husband Andrew has written in the divorce papers:

The nature of this action is: to dissolve the marriage between the parties based upon (1) the commission of acts of adultery by the defendant and (2) defendant’s cruel and inhuman treatment of the plaintiff.

Ouch! But, that’s not all. Andrew is seeking sole custody of he and his wife’s 7-year-old son whose name is also Andrew. Plus, he wants to make sure the judge approves of the couple’s pre-nuptial agreement that they signed 10 years ago in 2003.

Cowell may be asked to testify based on the information in the document — which, according to

If adultery is proven, Simon may be forced to get a DNA test done … Things aren’t looking good for the expecting couple.