Transgender star Domonique Newburn was brutally murdered and found on Tuesday. Here are the 5 Fast Facts about Newburn’s life as well as the star’s tragic death.

According to TMZ, there were clear signs that a struggle occurred in Domonique Newburn’s apartment on Bennett Avenue in Fontana, California. Newburn’s body was found around 4:30 p.m. and was pronounced dead at 4:38pm after calls were made to police in regards to domestic disturbance claims. The Huffington Post reports that there was blood on the poor, the door to Newburn’s apartment was wide open, and it appeared as if Newburn had been trying to escape through a front window of her home before she died.

2. You Can Help Find Domonique’s Killer

Friends & supporters of Newburn asked for hate against transgenders & LGBT community to end. They want justice so Newburn can rest in peace.

Fontana police are on the hunt for Newburn’s car, a black 2004 Mercedes C240, hoping it will lead to the suspect seen leaving her apartment. The license plate is 7AAY925.

The suspect is a “bare-chested” African American man in his 20s or early 30s, 5’8″ and average build. Keep your eyes peeled for anyone matching this description. Witnesses have reported that they saw the suspect take clothes, a computer, and the Newburn’s car to get away.

A candlelight vigil is scheduled 4 the tg woman who was an aspiring actress killed in her home. 7900 Bennett ave fon pic.twitter.com/ucyZK8R7HM

The web-series featured Newburn in 2010 as one of four gay friends trying to make it in show business. Born Daymond, Domonique began coss-dressing when she was 22 years old. She hoped to one day be the first trans-gender to have a hit song on iTunes. Apparently, Domonique had just begun getting hormone injections.

4. LGBT Community Holds a Press Conference During a Candlelight Vigil for Newburn

Watch this video on behalf of the LGBT community in support of Domonique Newburn.

5. The Executive Producer of Newburn’s YouTube Series Has Released a Statement

Ryan Hope, the executive producer of ‘Hollywood Houseboys has released a sad statement in regards to Dominque’s tragic death:

We are all deeply shocked and saddened by the tragic loss of our sister, Domonique Newburn. Domonique was an amazing person whose spirit transcended gender. When we set-out to document our lives for reality-television…we never once wished to make headlines like this. Our thoughts, prayers, and condolences are with her family. 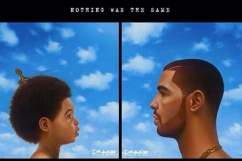 PHOTOS: Drake’s ‘Nothing Was The Same’ Album Cover Revealed [AUDIO]