Ellen DeGeneres announced on her Twitter today that she will be hosting the next Academy awards on March 2, 2014. DeGeneres is an experienced host and should be a good change of pace after the Academy received negative reviews over last year’s host. Watch Ellen’s 2007 Oscar opening monologue above.

It’s official: I’m hosting the #Oscars! I’d like to thank @TheAcademy, my wife Portia and, oh dear, there goes the orchestra.

Here’s what you need to know about Ellen’s new opportunity:

To glowing reviews, Ellen DeGeneres hosted the Academy Awards in 2007 and received universal praise for her work. Entertainment Weekly has we posted as #2 on their countdown list of the best Oscar hosts of the last 20 years. Steve Martin is #1.

DeGeneres was replaced by Jon Stewart in 2008.

Seth MacFarlane gave a controversial performance at last year’s Academy Awards. Some viewers were outraged by the song he preformed in his opening monologue called “We Saw Your Boobs” which chronicles in what movie famous actresses bared their breasts. You can watch the video, as well as the actresses furious reaction shots above.

DeGeneres is a good choice for the Academy to compensate for the accused sexism of last year’s performance.

Worth noting that three of Seth McFarlane’s references to boobs come from movies about rape.

Ellen Degeneres will host the 2014 #Oscars. Does this mean no “we saw your boobs” reprise? Actually I’d love to see Ellen’s take on that…

3. She’s Hosted the Emmy’s Many Times

Above is the video of her hosting highlights from 2001.

Whoopi Goldberg holds the record for most appearing female Oscar hosts. Goldberg hosted in 2001, 1998, 1995, and 1993. Ellen will now move into second place with her two years of hosting.

5. The Ellen DeGeneres Show was Renewed Through 2017

As of March 2013, The popular daytime talk show The Ellen DeGeneres Show has been renewed through its 14th season in 2017. Since the show’s start in 2003, it has won 33 Daytime Emmy Awards. 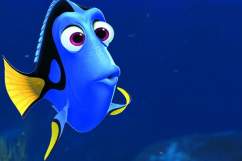