One the major announcements at the major Call of Duty Ghosts Global Multiplayer Reveal event in LA was not related to the game at all. During one of the trailer reveals, Eminem’s new song “Survival” was played, the song features songstress Skylar Grey. Event organizers also announced that the famed Detroit rapper’s new album will drop this fall. 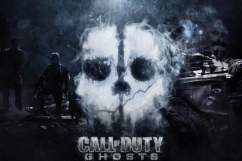 Previously Eminem had put his song “Won’t Back Down” on Activision’s last contribution to the Call of Duty series: Black Ops in 2010. Shady Records President told Billboard back in February that Eminem’s new album would be out at some point in 2013:

It’s safe to say that it will be post-Memorial Day at some point, but we’re not exactly sure when. We’ve got some dates locked in for him to perform live in Europe in August, so we’re trying to see what else lines up.

While Em’s producer Dr. Dre told Power 105 this week that the finishing touches were being put to the album:

You won't wanna miss the @CallofDuty #GhostsMP event at 10:30am PDT: http://t.co/kWxoa9YSsf

The lyrics to his latest hit have been published on Rap Genius:

[Intro: Skylar Grey]
This is survival of the fittest
This is do or die
Oh…

[Verse 1: Eminem]
Wasn’t ready to be remembered, man, I was ill-prepared
I was prepared to be ill, though, the skill was there
In the beginning, it wasn’t ’bout the ends
It was ’bout bustin’ raps and standin’ for somethin’
Quit the fuckin’ act like you’re happy, I’m fuckin’ back again
With another anthem, why stop when it doesn’t have to end?
It ain’t over ’til I say it’s over – enough when I say enough
Throw me to them wolves and close the gate up up
I’m afraid of what’ll happen to them wolves
When the thought of being thrown into an alligator pit, I salivated it
Raise your hands up like it’s 12 noon
Nah, homie, hold them bitches straight up
Wait until you dislocate a rotator cuff
Came above, came to ruffle feathers
Nah, egos, I ain’t deflatin’ ’em
Last chance to make this whole stadium erupt

[Hook: Skylar Grey]
This is survival of the fittest
This is do or die
This is the winner takes it all
So take it all

[Verse 2: Eminem]
So get your ideas, stack your ammo
But don’t come unless you come to battle, jump in the saddle
This is it, it’s what you eat, sleep, piss and shit
Lift, breathe, your whole existence just consists of this
Refuse to quit, refuse to slit, can’t diffuse the wick
If I don’t do this music shit I lose my shit
Ain’t got shit to lose, it’s the moment of truth
It’s all I know how to do
As soon as I get thrown in the booth, I spit
But my respect is overdue
I’m showin’ you the flow no one dos
I don’t own no diploma for school, I quit!
[?] they’re kinda normal with the traits
So you’d better trade your fuckin’ Nikes in for some toolbox synths
Cause you’ll never take my pride from me
It don’t have to be pride for me
So pull out your pliers and your screwdrivers