It's time! #TheBacheloretteFinale starts NOW. Retweet if you're joining us!

Des is heartbroken from Brooks dumping her on the first part of the finale last week and she’s still very hurt. When host Chris Harrison asks her what she struggles with most, she replies:

Just being so hopeful.

2. The Bachelorette Decides to Continue

After chatting with host Harrison, Des decides she wants to continue on her quest for love saying how sweet and amazing Drew is, while talking about how much she enjoys her relationship with Chris. Will this be enough for her when her heart really belongs to Brooks? Des confesses:

At the rose ceremony coming up, if I can’t see a future, for me, it’s over.

I think in some of our minds, it’s all ready over.

Both Sean Lowe and his fiancee Catherine return, but just to comment on the Live airing of the finale. Lowe says that if he had been dumped by Catherine like Des was by Brooks, he would have packed his bags and gone home.

4. Chris and Drew Aren’t Told the Whole Truth About Brooks

Hmmm Des held back a lot from Drew & Chris I think they are gonna be hurt watching this back #bachelorette what do youthink? #gettherose

When Desiree tells the two remaining men about what happened with Brooks, she fails to talk about the fact that she told Brooks she loves him and that he was the one she wanted to end up with. This is a giant piece of information they should know. Don’t you think so?

I know she probably had to, but why give a rose to any of them? She already said she wanted to be with Brooks. #Bachelorette

5. Drew Gets Dumped Within Minutes of His Date

Wait. I blacked out. Is she sending Des home? I mean Drew…#Bachelorette #gettherose

On Drew and Desiree’s date, in the first couple minutes, Desiree makes a confession to the camera that things don’t feel right with Drew and she doesn’t know how to break it to him. Poor Drew continues to talk about how in love with her he is and all Desiree can think is that she doesn’t feel the kind of feelings she needs to feel for him. And so, Desiree begins to cry and breaks the news to him as they sit on the beach.

So, Drew bites the dust and is totally blind-sided. He thanks her for being honest, but can’t come up with any words to say to Des. Interestingly enough, it’s Drew who ends up comforting Des.

This is just sad. Trying to make love happen is painful to watch. #bachelorette

6. This Finale Is the Saddest Bachelorette Finale Ever Aired

I thought the Bachelorette was supposed to be about love and all the happy things? Not misery and wrist slicing.

Both the first and second part are included when we say that this finale is the saddest series of events ever aired on The Bachelorette.

7. Chris Survives His Date With Des

When Chris tells Des he will help her through her getting over what happened with Brooks and that he will be there for her, she remembers the great chemistry she has with Chris and says that she can see this as a lasting relationship.

"He's fun!" "He cares!" Des is trying so hard to make herself "love" Chris. #Bachelorette

At the end of their date, Des cries to the camera that she feels guilty that she hadn’t realized she loved Chris from the very beginning. So, it’s starting to look like she’s getting over Brooks …

To my future husband: take notes from Chris, he knows what to say and when to say it #bachelorette

8. Chris Meets Desiree’s Family and Worries About Meeting Her Brother

Nate: "is he the one you want to spend the rest of your life with?" Des: "in this moment, yes." uh, wrong answer. #Bachelorette

In case you didn’t know, Desiree’s brother Nate caused a lot of problems for Desiree when she was on The Bachelor. His horrible behavior led Des to be sent home.

At this point, Chris still doesn’t know that Drew has been sent home and he is still in the dark about Des’ true reaction to Brooks’ leaving the show. Nonetheless, Chris receives Desiree’s father’s approval and is thrilled.

Des' brother is so honest and not cliche. ABC must hate that. #Bachelorette

After Chris leaves, Desiree’s brother Nate brings up a few concerns he has to Des. He asks about her feelings for Brooks, which catches Des off guard. Is it just us or is Brooks starring in this finale episode?

I'm sure Brooks will come back, realizing he shouldn't have left. They will get engaged and everything will be peachy keen. #bachelorette

Well, not really, but a lot of Bachelorette fans thought he would.

10. Desiree Gives the Final Rose to Chris After Confessing Her Feelings for Brooks

Desiree cries through her happiness as she tells Chris she was blind-sided by her feelings for Brooks until now and that she loves him.

"I was so blindsided by my feelings for Brooks, I couldn't see all I needed was right in front of me." #Bachelorette pic.twitter.com/C6pcFfvxZe

Chris kisses Des and proposes to her.

The End. Now, for the “After the Rose” show. 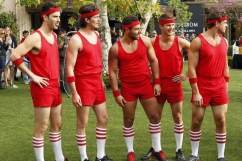