As reported by Today, Oprah Winfrey told Entertainment Tonight during an interview on Monday that she has been the victim of racial discrimination several times throughout her life.

Recently, a shop assistant in Zurich, Switzerland refused to show Oprah Winfrey a handbag because it was "too expensive" for her. #Hmmm

She opened up about her sad experiences on the show, describing a time she was denied service at a hand bag boutique in Zurich and another time she visited a shop in Paris — but was denied entry.

According to Winfrey, she’s almost completely certain her encounter in Zurich was due to racism. In her interview, she said she asked the store clerk to see one of the hand bags, and they answered:

No, it’s too expensive… No, you don’t want to see that one, you want to see this one because that one will cost too much. You will not be able to afford that.

Then when Oprah reportedly asked again, the clerk replied:

I don’t want to hurt your feelings…

And, according to Oprah — she thanked the clerk, said “you’re probably right,” and left.

Our hearts break as Oprah reveals the details behind her experience. Want to hear more? Watch the video of Oprah’s interview with Entertainment Tonight below! 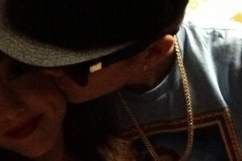