James Spader has officially been cast in the new Avengers film as Ultron, the maniacal robot, aka the villain! In the past, Spader has been great at playing the bad guy in movies like Wolf and Pretty in Pink. Let’s see how he does as a robot!

If you think Spader is a great pick for Ultron, share it!

According to Entertainment Weekly:

Marvel’s announcement didn’t specify whether the three-time Emmy winner Spader (Boston Legal, The Practice) will perform motion-capture to play the mechanical being (as Mark Ruffalo does for his scenes as The Hulk), or simply provide the character’s voice.

James Spader will face off against Earth’s Mightiest Heroes as the villain in Marvel’s “Avengers: Age of Ultron,” the sequel to 2012’s record-breaking “Marvel’s The Avengers.” The Emmy Award-winning actor will play Ultron in the Avengers’ much anticipated return to the big screen from writer/director Joss Whedon. The film comes to theaters on May 1, 2015.

For those who are unfamiliar with the Ultron character, EW describes him as:

Ultron is the creation of scientist Hank Pym, a.k.a. Ant-Man, a hero who has a suit that allows him to shrink to tiny proportions and a transmitter that can manipulate insects to do his bidding. Pym is a genius R&D guy, and Ultron is one of his proudest creations. But since the machine is designed to be self-aware and self-teaching, it quickly develops a narcissistic quirk in its programing.

Does that answer your question? So, what does the creator Joss Whedon have planned for Spader’s character? Supposedly, Whedon will attempt to peel away some of Ultron’s abilities in order to try to humanize the mad robot. Whedon explains:

I knew right away what I wanted to do with him … He’s always trying to destroy the Avengers, goddamn it, he’s got a bee in his bonnet. He’s not a happy guy, which means he’s an interesting guy. He’s got pain. And the way that manifests is not going to be standard robot stuff. So we’ll take away some of those powers because at some point everybody becomes magic, and I already have someone [a new character, Scarlet Witch] who’s a witch.

Whedon also adds that he loves the Ultron character because he’s “so pissed off”.

Share this if you can't wait for 'The Avengers 2'! 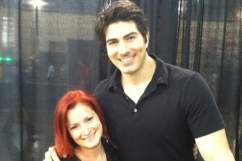