Kelly Clarkson recently purchased a ring regarded as one of the UK’s four “national treasures,” according to BBC.

The ring, banded in gold and holding a turquoise rock in center, is very beautiful in a simple kind of way. And, there’s no wonder Kelly wanted to buy it so badly — it was once owned by English novelist and famous author of Pride and Prejudice, Jane Austen. It was a bold, gold purchase for the American Idol star.

So, what’s the problem? CBC News calls the ring, which Clarkson purchased for £150,000 ($226,000) at a 2012 Sotheby’s auction in London, “literary memorabilia.” Basically, it’s too beautiful and historical for someone like Kelly Clarkson to take out of the country and risk depriving the nation of its rightful worth. At least, according to British Culture Minister Ed Vaizey, who has just placed a hold on the ring preventing it from exiting the country. The hold is reportedly valid until September 30.

…objects associated with her of any kind are extremely rare. I hope that a U.K. buyer comes forward so this simple but elegant ring can be saved for the nation.

What does Kelly Clarkson have to say about all this? And, will she be willing to hand the ring over just like that? 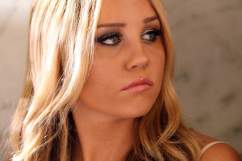