According to E! Online, Kim Kardashian could be working on a brand new project while she spends time sitting home taking care of baby North West.

There’s been speculation that Kim might design a new line of clothing for children after designer Lloyd Klein talked up a storm on the subject. According to Stylecaster, he is a very close friend of Kim’s. However, when Kim’s personal rep was asked about the exciting rumors they remained totally denied! Either someone involved is doing a really bad job keeping a secret, or, Kim is really just too busy to be thinking about business right now. 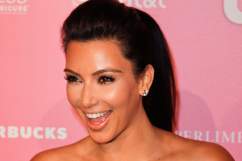 If the rumors were true, it would be no wonder Kim’s trying to do her own thing right now. While Kim sits home, she is under a lot of pressure trying to make Kanye West happy by making sure North stays out of the world’s view. Someone sounds like a control freak. … How much longer will it be before Kim says enough is enough and crawls back out into the daylight again? With baby North too!