Odom has not been seen in several days and was thought to be missing after getting kicked out of his house with Khloe on Wednesday following an intervention for his addiction to crack cocaine. He rejected his wife’s efforts to get him help.

Odom’s agent Jeff Schwartz told ESPN.com on Monday, however, that he was not missing.

“Lamar is not missing,” Schwartz said. “His wife knows exactly where he is. Playing in the NBA is still very much a part of Lamar’s plans.”

The 33-year-old basketball player spent last season with the Los Angeles Clippers and averaged four points and 5.8 rebounds while playing all 82 games. In 13 seasons, Odom has averaged 13.3 points and 8.4 rebounds a game. 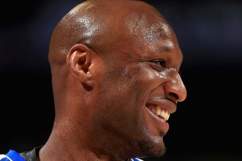