Beautiful actress Laura Bell Bundy, 32, has some pretty exciting plans coming up. On a path to expand both her acting and music career, the star has taken on a new television role. And, you’ll never guess who she’ll be acting side by side with: Charlie Sheen! Find out more about the actress’ new gig below.

TV Guide reports Laura Bell Bundy is expected to star in Charlie Sheen’s sitcom Anger Management. Bundy, as Dr. Jordan Denby, will play the role of Charlie’s “sex research partner,” according to the source. The character plays a moody psychologist that has been through a recent divorce and ends up meddling with Charlie’s life. As if Charlie Sheen’s life isn’t interesting enough, we can’t wait to see what Bundy will have in store for us as Dr. Jordan Denby!

Just a few months ago, Selma Blair and Charlie Sheen butted heads on the set of Anger Management, and it was no secret. However, E! Online reports that after the actress was officially fired from the show by Sheen himself, inside sources said she had no problem moving on. Good thing Laura was ready and willing to take her place. Selma, who formerly played Charlie’s therapist in the show, has officially left and her character is being replaced by Laura’s character.

3. Laura Comes on the Show Next Week

According to reports by US Magazine, Bundy will feature on the cast of Charlie’s show as soon as next week. And, she isn’t the only new arrival! The source also reports that Brian Austin Greene, who recently announced he’s having a second baby with Megan Fox, will also be joining the cast of Anger Management. As reported by E!, he will play the role of Charlie’s foe “Sean,” who is also Charlie’s ex-wife’s boyfriend. Scandalous! It’s only Season 2 of the show and already it’s experiencing so many changes. Hopefully, the storyline gets better from here.

4. Bundy Has Been on Broadway

Aside from her best known roles as “Becky” on How I Met Your Mother and “Shelby” on Hart of Dixie, the stunning actress was also a former Tony nominee. Additionally, she played “Elle Woods” in Legally Blonde — The Musical on Broadway. The seasoned actress is a crowd favorite.

.@LauraBellBundy is back with a new single AND new television role. Find out what show she'll be the leading lady in http://t.co/Y9cTvKhHti

In addition to her acting career, Bundy is a singer who recently came out with a hit duet called “Two Step.” The country singer is scheduled to tour with Rascal Flatts before making her appearance on Anger Management. Looks like she doesn’t have much time left!

Listen to her song in the video below: 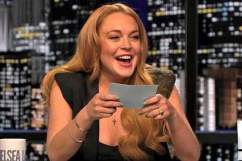