Straight from Fantasy Film Festival in Germany, a partial trailer from Fox’s upcoming X-Men film, X-Men: Days of Future Past, has been leaked online. There’s no way of knowing how long this bad boy will stay live, so buckle your seat belts as you witness Hugh Jackman’s Wolverine go back in time and try to change the past in some manner, but as was said in Breaking Bad last night, ‘Tread Lightly.’

UPDATE: Unfortunately, the trailer has since been taken down by Fox.

However, here’s a quick breakdown of what we saw. The trailer opens with everyone’s favorite rivals Professor X and Magneto instructing Wolverine to return to the past, in order to coerce their past selves to work “side by side to end this war before it ever begins.” We then see a slew of returning characters, including Mystique, Storm, Rogue, Beast and Iceman, along with a host of X-Men that are new to the movie universe.

We then got a quick glimpse of some good old civil unrest in Russia, the X-Mansion and the White House, and then a hail of bullets that fly at Wolverine. Beast then appears… and that’s about it, given that it’s only a partial trailer. That’s all you’ll see (or now hear about) for now, that is, unless you find a way for Professor X and Magneto to time travel you to May 23rd, 2014 for the release of the film. 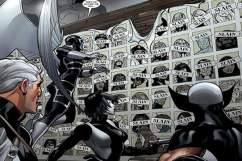