Two days after leaving rehab, actress Lindsay Lohan took over hosting Chelsea Lately, which aired Monday night, and joked about her fellow celebrities who “kept the tabloid industry alive in her absence.”

“I have a lot of people to thank, most importantly, the celebrities who kept the tabloid industry alive in my absence — like Anthony Weiner!” she said as a pants-less Weiner look-a-like strode on stage. “I would like to thank him for being such a d–k with an unlimited texting plan!”

“How come when Kanye acts like an idiot he gets a gold record, but when I act like an idiot I get a police record?” Lohan asked the audience.

The starlet showed impeccable timing as the stand-in host for Chelsea Handler, who she also poked fun at, worked the audience. During the roundtable segment with comedians Brad Wollack, Fortune Feimster, and Jen Kirkman, Lohan even called out Kristen Stewart for her latest tabloid stint.

“Kristen Stewart told off paparazzi this week,” Lohan said and described how the “Twilight” star cursed at photographers, telling them they don’t deserve to breathe the same air that she does. “I’m just excited that Kristen Stewart finally showed some emotion.”

In addition to making fun of other celebrities, she even poked fun as herself, referring to her rehab and jail stints. Lohan seemed to be in her element throughout the half-hour show as if she was a seasoned pro.

Lohan checked out of Cliffside Rehabilitation Center last week after serving a 90-day court-ordered sentence after being found guilty of lying to police about a car crash last year. 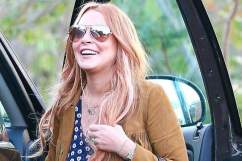 Lindsay Lohan Checks Out of Cliffside Rehab After Three Months