R&B singer Raz-B is currently comatose and on life support in China after being smashed in the face with a bottle at a nightclub, reports TMZ.

Raz was performing at a club in China on Thursday when a fight erupted in the crowd. The 28-year-old tried to break the fight up, but was smashed in the face with a glass bottle. He underwent minor surgery for a gash in his lip and was released, but the next day he didn’t wake up. The singer’s backup dancer found him and rushed him to the nearest hospital.

Raz-B after being smashed in the face with a bottle at a Chinese club.

Doctors tested Raz’s brain activity and determined his condition is more serious than originally thought. He’s allegedly slipping in and out of consciousness and is hooked up to a ventilator.

“He is in a coma and needs as many prayers as possible,” said Raz’s publicist, Toy Jones.

Raz-B planned to return to the United States for a comeback. The singer appeared on two Top 10 albums as a member of the group B2K. He has been living in China since 2011. 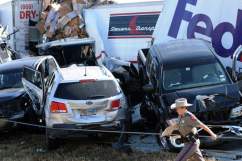