Son of famous dare-devil Evel Knievel, stuntman Robbie Knievel, was recently charged with a DUI for driving a motor home drunk in South Dakota. TMZ reports on the incident, saying on-lookers spotted the vehicle ramming into things and quickly called 911. He reportedly damaged two cars in his drunken outing. According to Bar Stool Sports, Knievel was pulled over at 6:38 p.m. outside Buffalo Chip campgrounds and admitted to having several drinks before getting in the vehicle.

Knievel was found texting in the driver’s seat upon being pulled over. Looks like Dad’s dare-devil blood is still running through the veins of this shameless stuntman … Too bad he got his license suspended for 30 days and was sentenced to pay $600 in fines — according to TMZ. 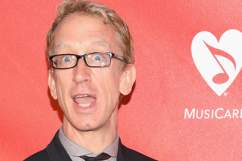