Roast Master Seth Rogen will lead his minions in the Comedy Central Roast of James Franco. The roast will be filmed on August 25th during the VMA’s, but will publicly air on Labor Day, September 2nd. Other comedians set to roast Franco include SNL’s Bill Hader, Jonah Hill, and many others.

Gearing up for the roast, two promos have been released. Check out this first one where James Franco makes out with himself!

Oh, and would you like to see James Franco getting punch in the face in slow-mo? Now’s your chance. 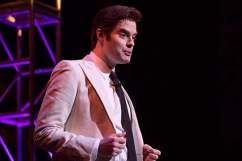