The World’s End sees the re-teaming of director Edgar Wright with his stars Simon Pegg and Nick Frost following their hits Shaun of the Dead (2004) and Hot Fuzz (2007).

The story begins in the summer of 1990, as five friends celebrate their graduation from high school by attempting an epic pub crawl through their town, Newton Haven. The group fall just short of their 12-pub target, failing to make the last pub, The World’s End.

Some 20 years later Gary (Simon Pegg) attempts to bring his friends Andy (Nick Frost), Oliver (Martin Freeman), Steven (Paddy Considine) and Peter (Eddie Marsan) back together to attempt the impossible crawl once more. Despite all of his friends having moved on with their lives and careers, Gary still lives in Newton Haven, living like a teenager. But our hero is determined to bring his friends out on one last hurrah.

Heavy.com was lucky enough to sit down with the stars of the movie.

1. This is the Third Movie in the ‘Ice-Cream Trilogy’

Following on from Shaun of the Dead in 2004 and Hot Fuzz in 2007, The World’s End rounds out the trilogy, the “Ice Cream Trilogy.” Or if you want to be a nerd about it, Simon Pegg and Edgar Wright call it “The Cornetto Trilogy.” Cornetto being an English brand of ice-cream, that Nick Frost’s character in Shaun of the Dead is obsessed with.

The writer/director of all three movies, Edgar Wright, has said this movie falls “within the British tradition of being either irreverent or having a dry reserve in the face of something calamitous. It follows a boys’ night out gone very badly wrong.”

Simon Pegg adds: “It’s a bigger proposition for us than the earlier pictures.”

The World’s End is definitely ambitious. That’s evident on a physical production level. But also, in this story, we address the element of just how healthy it is to be nostalgic – to look back, let alone to try to go back. Everyone has fantasized about having done thing differently; we all think back on our adolescences. Each film I’ve done with Simon and Nick has had a biographical element. 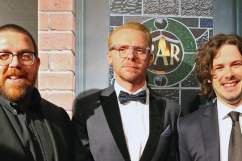 2. The Director Got the Idea for the Movie After Watching Superbad

Years ago Edgar Wright wrote a script for a movie called Crawl which dealt with the top of a massive pub crawl. A project he only went back to after watching Superbad and remembering his younger drinking days. Wright says:

When I was a teenager, I went on a pub crawl of fifteen drinking establishments in my hometown. I didn’t make it past pub six or seven. I’m not entirely proud of this. A couple of years later, I wrote a script about teenagers on a pub crawl. That sense of it being a quest, an adventure stuck in my head.

One of the star’s of The World’s End, Nick Frost, said he remembered Wright talking about the original project:

About 10 years ago, Edgar and I had discussed a pub crawl film. We went and hired a car and a cottage with the intention of doing a bit of writing. We just kind of drove around listening to music and could not do any writing at all which I now regret.

But it was while Wright, Pegg and Frost were on the promotional world tour for Hot Fuzz that the idea for a pub crawl movie was reawakened. Wright first spoke to Pegg about the plan:

I remember Simon and I were standing by baggage carousel in Sydney, during the promo tour for Hot Fuzz. I said to him, ‘There’s this idea I had for a film. What if, for the first five minutes, you showed these give guys in 1990 and then flashed forward with them trying their quest again as adults, and some otherworldly event happens?’ We started talking it through, and started to figure out what the cosmic intervention might be.

The notion of going home to where you were from and it being very different was something that we had in mind because we were on that world tour promoting Hot Fuzz. What we liked was the idea of, you go home and everything seems to have shifted and it wasn’t because you had changed – there was in fact something happening.

The notion of “you can never go home again” is a theme that runs through the movie. Pegg is philosophical about this theory, saying “home is a time, not a physical place.”

3. After Their Individual Successes, a Third Film in the Trilogy

Since Hot Fuzz in 2007 all three of the film’s most important players, Pegg, Frost and Wright have had their own successes. In 2011, Frost and Pegg wrote and starred in their own hit-comedy with Seth Rogan, Paul. Whereas Wright wrote and directed Scott Pilgrim vs. the World. Famously after his successes Pegg attempted to remain grounded, telling a reporter he would remain the same person, saying “it’s not like I’m going to be starring in Mission Impossible: III.” Six months later Pegg was cast in MI:3, not to mention a role in the JJ Abrams rebooted Star Trek.

Nira Park who has produced all of Edgar Wright’s movies said in the production notes for The World’s End:

It took quite a while to get Simon and Edgar back in a room. You wonder, ‘Are we ever going to get the band back together again? When we all started out, it was basically seeing each other every night and then meeting up the next day. We didn’t have families then. To get The World’s End off the ground at the scripting phase, I did a timetable for Edgar and Simon to show exactly how and where we could get them in the same room for a couple of weeks.

Eventually though Pegg and Wright gravitated back together, Pegg says:

We were very keen to keep the team together. That meant the same producers as well; Nira and Big Talk Pictures are like family – we go back a long way… Edgar and I do in fact always write together in the same room.

Once the “band got back together” the writing process was “swift,” according to Pegg, with Wright concluding:

What we have in The World’s End is a sci-fi paranoia film combined with a reunion for a pub crawl, which here is like a medieval quest with an extremely irresponsible King Arthur at the head of it.

Edgar and I joked about how in reunion films like The Big Chill there’s a corpse because someone has died. In The World’s End, Gary bascially is the corpse! When he first sees his old friends individually to talk them into doing ‘The Golden Mile,’ it’s like they’re seeing a ghost from their past.

We wanted Gary to appear that way at the start. I believe a lot of people have had the experience of cutting off, for whatever reasons, a friend who they were very close to at school. Maybe this friend had problems and you’re not willing to deal with them.

We all have a character like Gary King in our life and in some ways, there are elements of him myself and Simon, more thant we’d care to admit.

At which point Wright discloses that in his youth, Simon Pegg went through a phase as a ‘Goth.’ Not such a secret to anyone who has read Pegg’s autobiography, Wright tells more about the design of Gary King:

The pictures show his hair with a specific style, and that was something we wanted for him as Gary – it makes Simon look different than in our other movies. The temperament of this character is so different from his others [in the team’s earlier movies]

The two of us figured that the reason he’s dressed a certain way is not necessarily because he’s been doing so since 1990 but more that it’s for this particular night, like a military officer suiting up with medals and white gloves.

One of the movies greatest sequences is Gary’s attempts to convince his friends to rejoin him on the epic crawl. Pegg said it was “great fun to write,” he continues:

As an actor I find it quite satisfying to have whole days where it’s dialogue. Gary kind of bullies one, flatters another, challenges someone else and finally resorts to emotional blackmail.

5. The Soundtrack Will Have You Dancing in the Aisles

With our character’s youth being set in 1990, the soundtrack to the movie really reflects the era. Simon Pegg told me about how important music was to the setting of the movie:

We had a playlist of about 200 tracks during our writing process that we had on a loop and we’d add to every day…we had “I’ve Got the Power” by Snap or Jesus Jones or whoever. It wasn’t just stuff that we loved but guilty pleasures as well. As the script evolved we were like: ‘Oh, that’d be good for now.’

But in order to keep the amounts of royalty money that will be paid, after suggested songs on the paper, it’s taken off before the script gets into the hands of producers. As Pegg says, if record companies find out you really want something, they’ll raise the price, significantly.

Despite all of the incidental music, one song stands out, Alabama Song by The Doors, something Pegg regarded as “timeless.” He also mentions in passing that the filmmakers had to “pay through the nose” to get permission to use it. Once you see the movie, I’m sure you’ll all agree, it was worth it.

VERDICT: This is the third movie in the trio’s celebrated trilogy and it feels like it. But in a good way. The characters feel familiar but not predictable. The supernatural, absurd element, arrives unexpectedly to stop the movie from stalling a breathes new life into our heroes.

There are the usual cameos from stars who I won’t name [as per Edgar Wright’s note given to reporters at the screening], plot twists and memorable gags. If there’s a better comedy around in 2013, I haven’t seen it.