It looks like Marvel Studios is looking to ramp up the feeling of excitement for its upcoming superhero film, Thor: The Dark World. A glorious, epic and action heavy trailer was unleashed upon the world a couple of moths back, but now a 2nd movie trailer has just been unveiled. This latest peek into the film gives viewers even more Loki (YES!) and some more info on who exactly Thor has to save the world from this time around.

Are you all excited? So are we!

Man, that rock monster never had a chance, did he? We’ll get to see Thor smash some more evil doers on November 8, 2013.

In the meantime, bask in the greatness of this movie posters for the film: 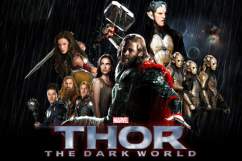