It looks like Kim Kardashian has kept her promise! Sort of…

Kim Kardashian yesterday showed up on momager Kris Jenner’s new talk show as her first public appearance since giving birth to North West. However, she sure did troll the crowd when her face came up on a big TV screen and she greeted her mother… from her own living room!

We were convinced Kim was going to make an in-person appearance to show off her post-baby body — but, apparently all the hype was over nothing. However, the Kardashian did appear happy and glowing when she came on, congratulating the success of her mother’s talk show and apologizing that she couldn’t be there in person.

E! Online reports, Kim “understandably has her hands full these days.” Of course, raising a baby isn’t an easy job. 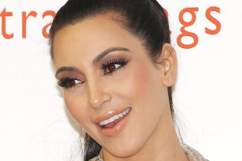 Read More
Celebrities, Kim Kardashian, Kris Jenner, North West, Talk Shows, Twitter
Kim Kardashian makes her first post-pregnancy appearance after giving birth on her mom's talk show. However, she showed up in a way no one had expected...