This Sunday everyone’s favorite drama, Breaking Bad, is sure to come to a dramatic 75-minute conclusion. The impending doom is leaving everyone to ask? Who will live, and who will die? Here are the top predictions for all of your favorite characters. Watch the spine chilling preview for the episode above.

Lets take a look at the possibilities:

So here is what we know, Walter White, after months in New Hampshire, is going to be back in New Mexico with ricin and a large machine gun. We know that Walt has a vendetta against the skinheads for taking his money, but last episode he also seemed pretty irate at his former partners at Grey Matter Industries.

Entertainment Weekly pooled all of their staff members and most think, rightfully so, that Walt has to die. Darren Franich thinks that Walt will use the ricin to kill the nazis and free Jesse only to have Jesse kill him.

I am on the fence about Walt saving Jesse considering just one episode ago he still wanted him dead. One way I see this going is Walt picks off the skinheads one by one, they hold Skylar and Jesse to keep Walt from going any further. Walt will inevitably let Jesse die but somehow save Skyler only to then be killed by one of his many other enemies, like Marie. Let’s not forget Walt’s cancer though. If he gets through the bloodbath it just might do him in.

Breaking Bad as a pretty mean sense of justice so I think it is fairly certain that Walt has to die, the only real question is how? And who will he take with him?

I read a really convincing prediction that Jesse will be one of the few people who will survive the carnage of the finale, after all, someone is going to need to take care of young Brock now that his mother his dead. However, Jesse will need a new job so the question is, will Jesse become the new Heisenberg? He did cook the purest “Heisenberg-level” batch since Walt retired.

As far as his relationship with Walt goes, Jesse is near the top of the list of people that deserve to take a shot at the king.

Remember that mean sense of Breaking Bad Justice I mentioned earlier? I think Skyler White may get the worst of it. She’s not innocent, she’s done bad things for the sake of Walt’s drug empire, can the show’s creators forgive her of that because she has kids and has suffered enough? My guess is not. I have a feeling Skyler is going down leaving Marie to finally care for the both Walter Jr. (Flynn), and Holly.

Skyler might just be part of the fallout, someone’s (probably the skinhead’s) revenge on Walt. Either way, I have a hard time seeing her come out of this alive.

Todd and the Skinheads

Oh they are going down, there’s really no way around this one. Ricin in the air duct of the Nazi compound? The big machine gun in Walt’s trunk?

The only toss up is Todd. Todd’s love for Lydia might just save him for some reason or another, otherwise why introduce that into the plot if not for it to pay off in some way? Or, There is a chance that if Jesse becomes the new Heisenberg, Todd may become the new Jesse. The Robin to Jesse’s Batman.

I hope, I hope that Saul Goodman comes back this week. He is probably off becoming the manager of the Cinnabon somewhere, but I can imagine a scenario where Walt tracks him down one last time because he needs some information. I could also even imagine Saul being killed in some dramatic way, just so that AMC can make a little nod to his impending doom in the new Saul Goodman prequel-to-Breaking Bad show.

I wouldn’t have even mentioned these two but, after their appearance in last week’s episode, the internet is buzzing with the speculation that the ricin is for them. I’m not so sure about that idea. I think their appearance in the last episode may have represented the larger injuries to Walt’s pride. However, if these two scientists get iced (pun intended) in the finale, I want to make sure I have them covered. 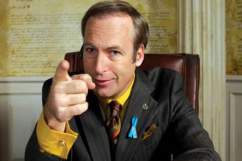