Walt is relocated to a cabin in New Hampshire. After being interrogated by the DEA, Skyler is threatened by Todd not to talk about Lydia. Jesse tries to escape from the Aryan Brotherhood, but is caught. He’s then held bound and gagged in a van and taken to Andrea’s house where Todd kills her in front of him. Walt calls Walter Jr, but Walter Jr. gets enraged and hangs up the phone. Walt then calls the DEA to turn himself in. While sitting at the bar, Walt watches Charlie Rose interview Elliott and Gretchen; both deny Walt has any serious claim to or history with Gray Matter. The police encircle Walt’s location, but he has already left.

And here’s what happened tonight in the series finale of Vince Gilligan‘s Breaking Bad.

The episode begins with Walter White still in Vermont, presumably right after he fled the bar after calling the FBI. He enters a snow covered car and attempts to hot wire it with a screwdriver he finds in the glove compartment, to no avail. The snow covered car, windows and all, then lights up in tones of blue and red as cops go driving by. Walt freezes and sinks down into the drivers seat, but the cops don’t see him through the snow. He then mutters to himself: “Just get me home. Just get me home. I’ll do the rest.” The last of the cop cars leave and he looks up at the flip down mirror, flicks it with the screwdriver, and keys fall into his lap. He drives away.

2. Back in New Mexico; The Schwartzes

At a gas station in New Mexico, Walt stops for gas with his car with New Hampshire plates. He opens the trunk, full of money and medicine, and takes his cancer meds. He then walks to a pay phone and calls a lady named Susan, somehow affiliated with Schwartzes, and pretends to be “David from the New York Times.” He is asking about a photograph for the Times and confirms their address and when they’ll be home so he can send a photograph to their house sometime soon. He learns the Schwartzes will be getting back home tonight. Walt heads to their home.

At their home, Walt waits outside as the Schwartzes walk in. He then follows them in and confronts them. After a brief spat of words, Walt pretends to have a gun and tells the Schwartzes he wants them to come with him to his car; they reluctantly oblige. Walt makes them carry in his money, all $9 million of it, and puts it on their living room table. He then instructs them that they are to set-up a trust for Walt Jr. on his eighteenth birthday. And just to make sure, he waves his hands: two red dots appear on each of the Schwartzes chest, presumably from hired guns. Walt informs them that he as paid hitmen to watch the Schwartzes to make sure they follow through on his demands even when he is gone. They agree, and Walt leaves. Back inside his car, he picks up Badger and Skinny P who had shone laser pointers on the Schwartzes.

Walt learns that someone is still cooking blue meth. He then surmises it’s Jesse.

First there’s a quick scene of Jesse daydreaming of woodworking, something he said earlier he always wanted to do. But then he wakes from the dream and we see he is being chained and forced to cook blue meth by the Aryan Brotherhood.

Then we cut to Walt at diner. It’s apparently his 52nd birthday and he makes him a 52nd happy birthday bacon plate. He then goes out to his car and opens his trunk; we now see an assault rifle in his arsenal.

Next we are at the interior of the upscale coffee shop where Lydia Rodarte-Quayle and Aryan brother Todd Alquistare having their weekly, Tuesday 10 AM meth meeting. Walt surprises them both by popping up, remembering Lydia’s punctuality and how she would never change her schedule. Walt deduces that Lydia and Todd are running low on methylamine and claims that he has come up with a way to cook meth without methylamine. Lydia tells him off, but Todd seems interested.

Walt leaves, and Lydia mentions to Todd that they should put Walt out of his misery.

We now see Walt in the middle of the desert, hooking up his assault rifle to an automaton and a car battery; presumably to make a robot-fired assault rifle. It seems he intends to take out the Aryan Brotherhood for what they did to Hank.

Next, we are taken to Skylar’s new, depressive apartment.

Marie calls Skylar, who is in the kitchen smoking a cigarette. Marie informs Skylar that Walt is in town. Skylar acknowledges this then hangs up. The camera pans in and we see Walt in Skylar’s kitchen. She tells him he has five minutes.

Walt tells Skylar not to worry, that he’s taking care of the Aryan Brotherhood so they won’t bother her anymore. He then gives her the GPS coordinates to Hank and Steve Gomez’s bodies so she has info to trade to the prosecutors when the case goes to trial.

Walt then admits that he did all this for himself, not his family, because it made him feel alive.

He then goes to see his baby Holly in her crib, and asks to see Walt Jr. when he comes home from school. Of course this is not possible, so he just hides behind an abandoned house while Walt Jr. exits his school bus and goes into Skylar’s home.

Good thing because Walt Jr. was under surveillance by the police.

Later that night, Walt rolls up to the Aryan Brotherhood’s gated compound pretending to want to sell his car on the black market. They let him. When he positions his car outside their clubhouse, he gets out and gets patted down by the Brothers. They take his keys from him and make sure he doesn’t have a wire.

Inside, the Brothers talk about killing Walt. He says he wants to see Jesse first. They fetch Jesse and bring him up in his chains. Walt grabs his keys while they are busy dealing with Jesse. Walt then tackles Jesse, unlocks his trunk, and holds Jesse down while the robotic, automatic assault rifle pops up from the trunk and sprays the clubhouse with gunfire. All the Aryan Brothers are hit, two survive wounded.

Todd crawls to the window to see who had shot at them. He sees Walt’s smoldering car. Jesse stands and strangles Todd to death with his chains.

7. It’s Not About Money Anymore

The leader of the Aryan Brotherhood has survived and tells Walt that if Walt kills him, Walt won’t know where all the money is. Walt shrugs and puts a bullet in his head.

Jesse grabs a gun and points it at Walt.

Walt tells Jesse, “I want this.”

But Jesse can’t shoot him, tosses the gun to the ground, and tells Walt to do it himself.

Walt walks over to Todd’s corpse, fishes the cellphone from his pocket, and answers. It’s Lydia.

Walt asks her if she’s feeling ill. We pan to Lydia in bed, looking sick and wan. She says yes. Walt informs her that he slipped her the ricin pill in her chamomile tea while at the cafe earlier. She will die from the incurable poison.

Jesse hops in a car and drives out of the chain compound, running down the chain link gate, reminiscent of his previous attempt at escape. He starts to cry.

Back at the compound, we see Walt has been fatally shot in the stomach. He seems to realize his fate, walks to the meth lab on the compound, touches the machines ones more, and falls down in a pool of his own blood. The camera pans out a la American Beauty rose scene. Cops arrive on the scene. 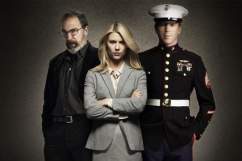