The Dexter season finale just aired. Here is a synopsis of what happened in the episode.

The episode began with an homage to Dexter fans.

Once the actual episode began, we were immediately taken back to the hunt for serial killer Oliver Saxon (Darri Ingolfsson). Saxon is on the run and wants revenge on Dexter, so he makes his way to the hospital where Deb is.

Before Saxon can get to Deb, Dexter visits her. The doctor assures him that while the “bullet bounced around a lot,” Deb should be fine.

Dexter asks Lt. Battista to put a watch on Deb in case Saxon comes for her while she’s sedated at the hospital.

In the meanwhile, Dexter heads to the airport to meet Hannah. Unfortunately, Private Eye Jacob Elway (Sean Patrick Flanery) is waiting in the boarding area for Hannah so he can arrest her and collect his bounty. Dexter provides a divergent to get Hanley in trouble with the airport security, but in doing so gets the airport shutdown.

The storm, Hurricane Laura, that everyone has been talking about begins to come.

Since Dexter can’t get Hannah and his son, Harrison, out of the Miami airport anymore, he sends them on a bus to Jacksonville to catch a flight to Argentina and promises them that he’ll meet them in South America.

While on the bus, Elway pops up and attempts an arrest on Hannah. Hannah drugs him and makes it to Argentina with Harrison.

Back in Miami, Dexter finds out that there was an issue when Deb went into surgey and that an aneurysm has rendered her brain dead.

He is immediately on the hunt for vengeance against Saxon.

Saxon gets arrested in front of him at the hospital by Battista.

Dexter then sneaks into Saxon’s holding cell and lures him to attack him. He then attacks him back and kills him with a pen. While looking at the security footage with Battista and Quinn, they both agree — Battista a bit more reluctantly — that it was self-defense. Dexter is free to go.

The hurricane is now in full force.

Dexter heads to unplug Deb from life support since it’s no way to live. Once confirming again that Hannah and Harrison are safe in Argentina, Dexter takes Deb’s body out in his boat, Slice of Life, and drops her into the ocean.

He then drives into the hurricane and supposedly kills himself.

Hannah finds this out while reading a newspaper with Harrison in Argentina.

The screen goes black, then goes to a bearded Dexter working in a lumberyard in what looks to be the Pacific Northwest.

While it may not be the best way to end the beloved series, the writers tied up the story nicely. Dexter admits at the end that he hurts everyone he loves, so by letting Hannah and Harrison live their lives away from him, he is at peace.

Still would’ve loved an “on the run Bay Harbor Butcher” season 8, though… 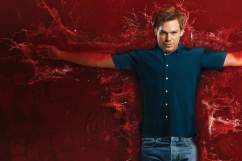