The tagline “In space, no one can hear you scream”, was popularized back in the 1970’s by Ridley Scott’s horrifying sci-fi classic Alien as Sigourney Weaver and her crew faced off against the titular creature and her brood in the desolate depths of space. In Alfonso Cuaron’s Gravity, that familiar phrase comes back to haunt us in a slightly different manner.

Gravity opens with a similar portent of doom that can be seen in the trailer preparing audiences for whats to come. The film follows Dr. Ryan Stone (Sandra Bullock) and veteran astronaut Matt Kowalski (George Clooney) performing a routine repair mission for NASA. During the maintenance on the shuttle, Kowalski and Stone are notified by mission control that a storm of debris from a destroyed Russian space-craft is heading towards them. As they quickly try to get out of harm’s way, both realize they are too late.

That’s where this summary needs to end because that’s all you need to know. While Clooney’s character is entertaining throughout the story, this film belongs to Bullock. Her struggle to survive in the dark recesses of space is incredibly suspenseful. Audiences will literally be clutching their seats as Dr. Stone struggles against the onslaught of obstacles thrust in her path while actively cheering for her in hopes she gets back home. As these events unfold, they tend to border on formulaic but it still serves the story well. 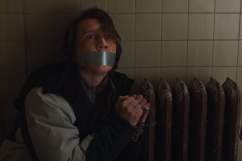 Hugh Jackman’s Prisoners: The Only Review You Need To Read

While Bullock performs well, the real credit belongs to the technical team behind this production. Similar to last year’s Life of Pi, this is another survival story that must be seen in 3-D or IMAX. Viewing this on one of these special screens will thrust you right into the story as Cuaron and his crew navigate the camera around the action. You practically feel like your a part of this journey as Bullock spins and struggles against the gravitational pull. Note: sit as close to the screen as possible to get the full effect. Don’t if you get motion sick easily.

Gravity has staked its claim for the upcoming Oscar race and I wouldn’t be surprised if this space epic swept all of the technical categories but it is still worth the price of admission.

‘Best Space Film Ever’: Extended ‘Gravity’ Trailer Will Give You Anxiety Problems