The Harry Potter franchise may have ended in 2011, but actor Daniel Radcliff still has to deal with wild fans everywhere he goes.

Droves of screaming Harry Potter fans stampeded through barricades at the Venice Film Festival the second Radcliff stepped onto the red carpet of the premier of his new film Kill Your Darlings, reports E! Online. Body guards quickly came to the actor’s rescue to make sure he could enter the premier unharmed. Radcliff, however, didn’t seem to be too phased by the chaos.

“Thankfully, it’s not always like this,” Radcliff said. “I’ve been dealing with it in various ways since I was 11. I don’t take it seriously, actually I think it’s funny.”

Radcliff stars as poet Allen Ginsberg in the upcoming film about his life, Kill Your Darlings. The film tackles adult themes such as drug use and homosexuality.

“I’m incredibly grateful for the swirl of support behind me,” he said. “My fans seem to be excited by the unconventional path I am taking.” 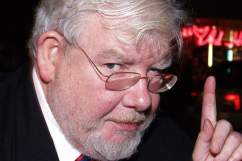