Our beloved icon Jack Nicholson is retiring at age 76 … or is he? Here are the 5 Fast Facts.

1. Hollywood Fears They Are Losing a Legend

Jack has — without fanfare — retired.

Whether Radar’s story gets some kind of official response from Nicholson’s camp has yet to be seen. It’s likely that Nicholson may have chosen to quietly step away from acting, like some of his contemporaries, Gene Hackman and Sean Connery for example, but claims that he’s losing his memory will likely have to be responded to.

Have a look at Jack’s Top 10 Acting Performances below.

2. The Retirement Is Said to Be a Result of Memory Loss

At 76, it’s tough for anyone to remember certain things, but how about memorizing scripts? Radar Online reports:

There is a simple reason behind his decision — it’s memory loss. Quite frankly, at 76, Jack has memory issues and can no longer remember the lines being asked of him.

According to Radar Online:

Producers for the forthcoming film Nebraska had wanted him to play the key role of an aging, booze-addled father who makes the trip from Montana to Nebraska with his estranged son in order to claim a million dollar Mega Sweepstakes Marketing prize. The role ultimately went to Bruce Dern, after Nicholson advised the filmmakers that he was not interested.

Take a look at some of the movie roles Nicholson didn’t turn down in the video below.

4. How Do You Know Was His Last Film

Nicholson last appeared in How Do You Know, which also starred Paul Rudd, Reese Witherspoon, and Owen Wilson.

5. The Rumors Are Wrong!

Jack Nicholson is NOT retiring, because Christian Slater has yet to properly handle doing that character that they both do in everything.

NBC’s Maria Shriver has confirmed to E! News that reports of Nicholson retiring from acting due to memory loss or dementia are 100 percent false, adding that the Chinatown star is not suffering from any memory-related illness or dementia and has no current plans to retire. 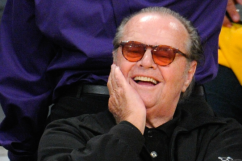