Jon Gosselin from Jon & Kate Plus 8 has been working as a waiter and living more peaceful life in a cabin in Pennsylvania. But, yesterday in Beckersville, Pennsylvania, things were not so peaceful. A female photographer tried to follow Jon Gosselin home to get photos of his cabin after he got off of work, according to TMZ. When the photographer followed Jon off the main roads onto some back roads, she didn’t realize she had entered onto private property.

As soon as the photographer began to take pictures, Jon pulled a gun from the back of his pants. Apparently, Jon started yelling at the woman that she was trespassing and he fired off a “warning shot.” The photographer immediately left and said that Jon followed her until she got back onto the main road.

So, did anything come of this? TMZ reports:

The photog just went to the cop shop and she saw the light — if she filed a complaint the police would have probably ended up charging HER with criminal trespass. So she simply asked the cops to make a note in their file that Jon fired a shot in the air and went on her merry way … on public property. 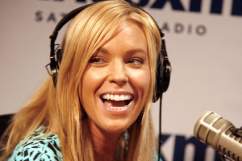