Congrats @katebosworth on your Sat #wedding done by @MarthaWeddings!!! Can't wait to see the spread this November! pic.twitter.com/DXHrrt6TYl

Kate Bosworth, 30, has tied the knot with fiancee Michael Polish, 42. Check out the 5 Fast Facts on the wedding details as well as everything you’d want to know about the groom.

1. It Was a Rustic Wedding in Montana

The wedding took place over the weekend on Saturday, in Philipsburg, Montana at The Ranch at Rock Creek. The reception and ceremony were somewhat rustic with a country-style theme. Bosworth wore two custom Oscar de la Renta gowns, one of which had an 8-foot train that was 16-feet wide. For the reception, the bride wore a floral embroidered tulle dress. Polish, on the other hand, wore a nicely tailored, three-piece charcoal suit by Brooks Brothers.

2. Their Wedding Was at a Saloon?

The couple exchanged self-penned vows during an intimate ceremony on a bluff overlooking acres of rolling hills, streams, mountains, and wildflowers, late on a golden afternoon.

Michael’s 15-year-old daughter Jasper was part of the ceremony and celebrities Lake Bell and Walton Goggins were present.

After the ceremony, the newlyweds and their guests made their way down to the property’s Granite Lodge, where a supper of local fare was served. Music (provided by Kelly Willis and Bruce Robison) and dancing followed in the historic Silver Dollar Saloon, and then, of course, came the after-party!

The happy couple had envisioned an event with Victorian touches and romantic Western influences mixed with fun events that took advantage of the Montana setting.

3. Polish Met His Fiancee on the Big Screen

Bosworth met and fell in love with her new husband Polish when he directed her in the drama Big Sur in 2011.

Bosworth once told InStyle UK that:

I never even dated my husband-to-be … He said to me after just a few weeks before we were even together. I’m going to marry you. He just knew.

4. Believe it or not, Polish Is an Amazing Baker

my hubby, the baker. pic.twitter.com/L0CaOeeY

Oh, and Polish is also a hopeless romantic …

5. Michael Polish’s Daughter Jasper Is On-Board With the Couple

Michael Polish’s teenage daughter Jasper is very close to her dad and to her new step-mommy.

Kate Bosworth and her hubby are always tweeting photos with Jasper, boasting their love for her.

And, Jasper returns the favor as well. 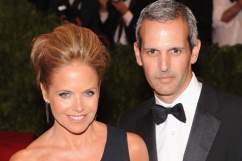