Americans will never forget 9/11. Whether you’re a lawyer, a janitor, a student, or even a celebrity, September 11th is a time to remember. Have a look at some of the celebrities who are honoring 9/11 today on Twitter.

Our Heroes! United We Stand as we Remember 9-11 http://t.co/RvpBU4mrcr

We #neverforget but we do move on, rebuild and grow stronger!!! #GodblesstheUSA #911 #sept11 #beforeafter http://t.co/Rg9NUr7dgV

LET'S ALL REMEMBER – SEPTEMBER 11, 2001 Let us all remember the innocent victims of the World Trade Center and… http://t.co/YuChDTnNX9

It's been 12 years. That day, we didn't let the terrorists break our will, but sadly we've all lost so many liberties since #NeverForget

Glad to be in NY on 9/11. Remembering all those who lost someone.

Prayers & love in memory of those who fell & their families..9/11

Please take a moment of reflection for #september11. #begrateful

We will never forget #September11

#september11 I remember coming home from school and seeing my mom crying. I asked why and she showed me the TV & said I hope yr uncle is ok

Never forget the 343 brave men of the FDNY and the courage and dedication they showed on 9/11. pic.twitter.com/lk53nPmJ7r

Remembering all who lost their lives 12 years ago today. #GodBlessAmerica http://t.co/KfBWvuDowX

We will always remember thoughts and prayers for all those lost 9/11 http://t.co/QGAHp5sI4r

Taking a moment to remember those we lost 12 years ago today, you will always be in our hearts #neverforget pic.twitter.com/yZXEPhTRCk

Praying for those whose lives were taken too soon and their families who continue to hurt. #neverforget #september11

9-11-01 never forgotten .. Ill never forget where I was that day.. #UnitedWeStand pic.twitter.com/es4Wp3mFs8

Remembering 9/11/01. Here's to a future not terrorized but filled with acceptance, understanding and love. United we stand.

RIP 2 those that lost their lives on this day #september11 n #NeverForget the heroes that gave their own 2 save many..(

Today is a day in history we will always remember. Prayers still for all victims of 9/11

Remembering all who lost their lives 12 years ago on this day and all of our troops .. United We Stand http://t.co/vOzNOP4BBF

My prayers and thoughts are with everyone today. #september11 #NeverForget pic.twitter.com/K9tXQSHtXt

Still gives me chills :/ #NeverForget #September11 praying for those who lost someone. That’s a wound that probably will never heal.

Can't believe it's been 12 years. #neverforget

September 11, we will NEVER forget that day in 2001… God BLESS America, SPECIALLY to people who LOST someone… http://t.co/e3hohq1peN

#UnitedWeStand To all the people that have lost their lives, to all the heroes that were/are still among us..this day we will #NeverForget

It's very hard to believe it's been 12 years. Sending my thoughts and support to all those affected by #September11.

Today, we honor the lives we lost in the attacks on 9-11. #UnitedWeStand

#NineEleven We will never forget.

My thoughts and prayers are with the families and friends of the victims of 9/11. #alwaysremember 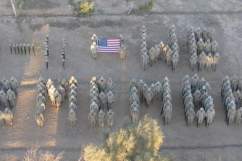