Saturday Night Live season 39 premiered last night. The cold open starred Jay Pharoah as President Obama, addressing the nation about the upcoming implementation of Obamacare. At the end of the sketch, Breaking Bad star Aaron Paul made an appearance as a meth user who wanted more info on Obamacare.

Hosted by alum Tina Fey, Fey’s opening monologue included references to the many new cast members joining the season and ended in a musical number intended to humiliate them as token background dancers for scenes.

Drawing on how many new cast members there are this season, the first sketch was titled, Member of Arcade Fire or New SNL Cast Member? Not particularly hilarious.

The rest of the episode entailed lots of groaners, but some of the more funny skits were digital shorts. Including a very funny e-meth pipe (a reference to the expanding e-cig craze), and a funny short making fun of Girls.

Probably the highlight of the episode was the end of Seth Meyers’ Weekend Update segment, where the popular Drunk Uncle (Bobby Moynihan) was visited by his meth using nephew, portrayed again by Aaron Paul.

All in all, I give the premiere a 6/10.
Nobody in the new cast particularly shined, but it’s just one episode in.
Although with Fred Armisen and Jason Sudeikis gone, they’ve got some big boots to fill. 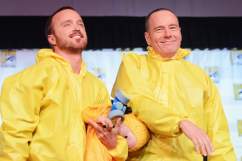