January Jones stars in this sexy old Western flick called Sweetwater. It’s about revenge, sex and the Old West. Check out the trailer above. By the way, did we mention Jones gets topless in the film? 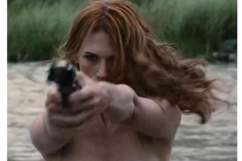