Zac Efron reportedly had a stint in rehab this year due to a serious addiction to cocaine as reported by TMZ.

Apparently, the height of Efron’s cocaine problem occurred while he was filming the movie Neighbors. 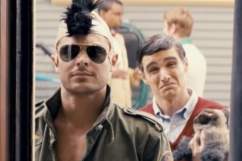 Efron allegedly was a no-show on several days for filming due to his addiction. In addition to cocaine, several sources confirm that Efron also liked to dabble in the drug called “Molly,” which is a pure form of Ecstasy. TMZ reported:

We’re told … early this year, Zac and some friends went on a coke rager in a room at the SkyLofts at the MGM Grand in Vegas … and caused around $50k in damage. No word on who took care of the bill.

It seems that now the air is clear and Efron is clean since his completion of rehab earlier this year. Congrats to Zac and best wishes!