Amal Alamuddin is the hot topic when it comes to George Clooney. Check out the 5 Fast Facts on Alamuddin and her connection to Clooney.

UPDATE: Clooney and Alamuddin have tied the knot. Check out all the details in the below link: 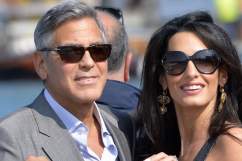 On October 25, 2013, Daily Mail reported that George Clooney had been seen around London with a mystery woman in tow. The two ate together at the Berners Tavern. On October 28, 2013, Clooney’s mystery woman was identified by E! News as Amal Alamuddin.

2. Amal Alamuddin Has WikiLeaks Founder Julian Assange as a Client

Apparently, Alamuddin is a lawyer who happens to be representing WikiLeaks founder Julian Assange in his extradition proceedings with Sweden.. According to E! News, Alamuddin specializes in human rights, International law, extradition, and criminal law. Plus, this year she landed the No. 1 spot on London’s Hottest Barrister list. This sounds perfect for Clooney who is a known to be quite the political activist.

Some reports were linking the famous actor to model Monika Jakisic, while others stood firm that Amal Alamuddin was Clooney’s love interest. Jakisic is a 33-year-old model who is also based in London. An inside told Us Weekly that:

Monika and George are dating. She’s not his official ‘girlfriend’ yet, but they’ve become very close. She has been seeing George almost every night.

According to the man himself, all of the dating rumors circulating right now are false. Perez Hilton quotes Clooney as saying:

Three different stories in three weeks. I should be an athlete. But, no of course, it’s all made up.

4. She’s a Woman of Many Languages

Alamuddin speaks multiple languages, as she is fluent in Arabic, English, and French. We wonder if she’s speaking the language of love to George Clooney right now … if the reports are true of course.

According to the International Business Times, Alamuddin is quite the scholar. The media source reports:

Starting her collegiate studies in the United Kingdom, Alamuddin obtained her B.A./LLB from St. Hugh’s College at Oxford University. The British native then went on to study in the U.S. at New York University School of Law (LLM), also receiving the Jack K. Katz Memorial award for her accomplishment in the field of law upon completion. Alamuddin also flaunts her education on Facebook, her account showing she is currently a member of the Oxford University Arab Cultural Society group and the NYU Law Alumni in London page.

5. Alamuddin Only Seems to Use Twitter for Political Reasons

UN reports on legality of drone strikes under international law: http://t.co/iYMGkkPdwL and http://t.co/V4PnKfsLUo, debate at UNGA on oct 25

It only makes sense that, given her line of work, Alamuddin be head over heels for politics. This is quite apparent when it comes to her Twitter account. Have a look at some of her tweets.