The second episode of American Horror Story: Coven has just aired called “Boy Parts”. Here’s what you may have missed.

1. Misty Day Is Alive And Well

The witch played by Lily Rabe is alive and well! Misty Day was burned at the stake at the beginning of the last episode. In the present day, she wanders into two alligator hunters. Ashamed at the atrocities the hunters committed against god’s creatures, she summons the dead creatures back to life to maul the humans.

Desperate to find out how Delphine Lalaurie is able to live and search for the secrets of immortality, Fiona learns how Lalaurie was imprisoned. It turns out Marie Laveau gave Delphine this power as a punishment. In the past, she killed Lalaurie’s family as retribution sending the cruel plantation owner into the coffin Fiona dug her out of.

Cordelia attempts to get pregnant with her husband through magic. They’ve tried to do it through artificial means but it won’t work. Ultimately, Cordelia casts a spell after a night in bed with her husband hoping it works.

After Madison killed him and his frat brothers last week, New Orleans detectives interrogate the girls but Fiona uses her power to make them forget. Once Madison found out Zoe killed her rapist, they head to the morgue to revive kyle. Stitching his body together from separate parts, they cast a spell that doesn’t seem to work at first. Zoe kisses the corpse only for him to come back as a mindless beast.

Curious to know about the voodoo queen, Fiona visits Laveau at her hair salon. Meanwhile, Lalaurie channels her thoughts to Nan who frees her frustrated with the constant noise. Lalaurie runs off and knocks out Queenie. Laveau and Fiona face off with Fiona offering Delphine as a ransom to figure out she can obtain eternal youth.

Misty appears to Zoe after she dries Kyle away from the morgue. Zoe and Misty bond with each other as she tells Zoe Kyle will be good as new. It turns out that Laveau’s husband is shackled to Marie as a monstrous enforcer and they learn they are back at war with Delphine. Lalaurie learns what happened to her house and hopes that Fiona may kill her someday. Episode ends. 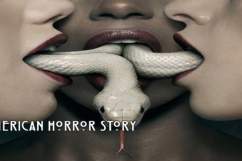