Johnny Knoxville in age-defying make-up as the titular Bad Grandpa.

In Bad Grandpa, Knoxville plays 86-year-old Irving Zisman, who is taking his grandson Billy (Jackson Nicoll) on a road trip across the United States to live with his father after his mother is incarcerated. In true Jackass fashion, the movie is peppered with hidden camera pranks and stunts.

Post pictures of your grandparents behaving badly using #BadGrandpaPics and you could win a trip to the premiere! Share your own hilarious pics here!

You can check out more hysterical pics of grandparents behaving badly over at JackassMovie.com. 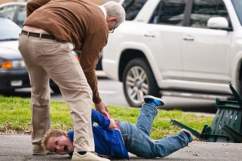 ‘Bad Grandpa’ Trailer Shows the Hellraiser Side of Senior Citizens

Check out these hilarious stills taken from the film to get ready for Bad Grandpa!

Bad Grandpa is released in Australia “only at the movies” on November 14.