We can blame Twilight for reigniting our collective interest in vampires. Unfortunately, this franchise has sullied the myth of these fearsome creatures and turned them into dull and lifeless pastiches. Luckily for true fans of horror, NBC’s Dracula restores the reputation of these fanged fiends by creating a story revolving around the original creature of the night.

At New York Comic Con, NBC ended Day 2 by hosting an exclusive screening of the pilot starring Jonathan Rhys-Meyers. The story focuses on Dracula being re-awakened and then embarking on a revenge plot against a mysterious cult known as the “Order of the Dragon.” In an intriguing twist, he sets his plan into motion by masquerading as an American inventor called Alexander Greyson living in 19th century Britain.

I’ll stop there for the sake of spoilers but this is highly worth a watch. Bram Stoker’s masterpiece has always been the subject of various silver screen adaptations but audiences have rarely seen a small screen story play out. Rhys-Meyers does an exceptional job with his character by toning down on the camp and cliche. However, he nicely balances the occasional one-liner with a series of impassioned speeches emphasizing the importance of his mission. Let’s face it, lesser actors could have easily reduced this role into a litany of “I vant to suck your blood!” lines. The episode had a few references to the source material that will make hard-core fans happy as well while gore-hounds will be pleased as the show finally portrays vampires as the traditional vicious and cunning hunters with an unquenchable thirst for blood. 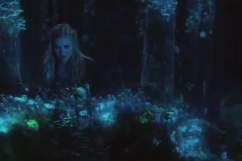 ‘The 100′ New York Comic Con: The Only Review You Need To Read

The factor that could decide the show’s fate is how it performs on a Friday night. While that strategy has allowed for Grimm to thrive, the network hopes that this established player can give this newbie a big boost in the ratings. Only time will tell.

Dracula will premiere on October 25th at 10pm on NBC.