Join us in lighting a candle in memory of Cory Monteith here: http://t.co/AzCcWfNqV8 #RememberingCory #glee http://t.co/TUaJFrAsGc

‘Glee’ has begun with the full cast dressed in black singing “Seasons of Love.” Stay tuned for full coverage of the episode as it airs.

The episode takes place a couple weeks after Finn Hudson’s funeral and the cast returns for a memorial their teacher has put together. Though it’s difficult to be together, it brings comfort for the students.

Even with all the sadness, Principal Sue still offers inappropriate jokes.

Matthew Morrison’s character, Mr. Shue, says he wants them all to sing together to remember Finn Hudson.

This episode is so different. You can see the raw emotion in all of their faces. #TheQuarterback

Amber Riley sings the second song in the episode: “I’ll Stand By You,” which is sure to bring tears to anyone’s eyes who watches it. As the camera pans to the other cast-mates, they begin to join in, appearing very grief-stricken. The performance ends with Amber Riley’s character fighting tears.

Dear God, Amber Riley singing "I'll Stand By You" is so beautiful. Such a perfect choice. #TheQuarterback

Mercedes song, Puck stealing the tree and this scene with the Hummel family ruined me #TheQuarterback

Burt Hummel crying to son Kurt that he should have hugged character Finn a lot more is truly heartbreaking as you see the real tears fall from his eyes. Kurt then begins to cry as he tries on Finn’s letter jacket. The entire scene with Finn’s family is beyond sad.

"You have to keep on being a parent even though you don't have a child anymore." #TheQuarterback

Strangely, Puck wants to buy Finn’s jacket off of Kurt, wanting something to remember Finn by, but Kurt won’t give it up.

After a short commercial break, the cast sings James Taylor’s classic song “Fire and Rain.” The lyrics are truly moving.

Naya Rivera leaves upset and sees a giant memorial surrounding Finn Hudson’s locker, but soon it starts to get taken down as per the orders of Principal Sue. Rivera’s character then storms into Jane Lynch’s office and becomes very emotional, telling Lynch’s character how much she always hated her. She then becomes so angry she pushes Principal Sue and storms out.

I just keep thinking that it's not only the characters that are crying, but the cast members themselves. We all miss Cory. #TheQuarterback

Matthew Morrison’s character begins to struggle as he can’t completely express his feelings because he’s trying to take care of the feeling of everyone else.

Mark Salling shows up to the school drunk as he can’t seem to deal with his feelings, saying that no one understands. He confesses:

Finally, he breaks down crying, saying it was Finn who always kept him in line.

an A+ for @NayaRivera Her voice was cracking,The emotion was so real, I'm definitely NOT ready to see Lea #TheQuarterback #RememberingCory

Salling requests that Finn’s football number be retired and his wish is granted in exchange for the tree he stole.

Next, Naya Rivera sings “If I Die Young,” but breaks down and runs out of the room screaming. It’s heart-wrenching. When Kurt follows her to the auditorium, she talks about what a wonderful person Finn Hudson was. As Kurt leaves her in the auditorium, he wraps her shoulders in Finn’s letter jacket.

Keep in mind we still haven’t seen Lea Michele yet this entire episode.

“No Surrender” is strummed on the guitar by Puck (Mark Salling) as he sings and the other cast members begin to cry. Then Puck stares at the empty chair where Finn used to sit and the camera locks on the chair.

As soon as the song ends, Naya Rivera’s character Santana interrupts, accusing Puck of stealing Finn’s jacket while she was resting. Everyone believes Puck took it, but he insists that he didn’t take it.

Santana takes it upon herself to apologize to the evil Sue. What she doesn’t expect is for Sue to open up about how it kills her that Finn will never know she didn’t hate him. She says it breaks her heart that he’ll never know she thought he was a great person.

The next scene goes back to the memorial outside Finn’s locker. Suddenly, Lea Michele appears and it cuts to commercial.

Rachel (Lea Michele) gets emotional talking about Finn and how she loved him. Her intense feelings and tears clearly affect the rest of the cast as they hold each others’ hands and fight their tears. After a short monologue, Lea Michele begins to sing “Make You Feel My Love” as tears stream down her cheeks.

And here comes #LeaMichele…..and more of my tears. Her strength and grace in this difficult situation is truly admirable! #TheQuarterback

After Lea Michele’s insanely emotional scene, the show moves on to Santana posting signs in search of Finn’s letter jacket. Something inside me thinks Sue took the jacket. Another part of me thinks Mr. Shue took it.

In the next scene, Puck replants the tree that was planted in memory of Finn Hudson … the one he stole. He then decides he’s going to join the armed forces since he no longer has Finn to guide him.

Goodbye Puck, you were and always will be my favourite part of Glee. I think the character got a great sendoff @MarkSalling #TheQuarterback

Rachel approaches Mr. Shue, asking him if he’s okay because she knows it’s hard to grieve when you’re being a rock for everyone else. Then Rachel starts to talk about Finn and gets scared she’ll forget his voice one day. She then talks about a plan she had, that they’d end up together, and she says he knew all about her plan. She sobs to Mr. Shue saying:

He was my person.

Then, she thanks Mr. Shue and gives him a plaque to hang up for Finn. It’s a photo of Finn and underneath it says:

The show must go … all over the place … or something.

Mr. Shue returns home and just as I suspected … he pulls Finn’s jacket out from his school briefcase. Finally, he lets it all out and cries into Finn’s jacket.

And with that, my heart is shattered into so many pieces. Mr. Shue. My god. #TheQuarterback

At the end of the episode, several cast members address viewers about getting help with addiction.

A fine end to the show and a great tribute to Cory Monteith.

For more coverage from “The Quarterback” episode: 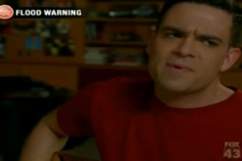 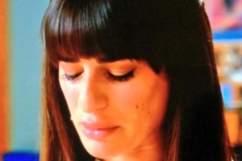 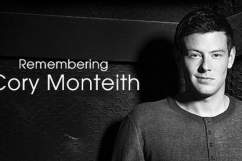 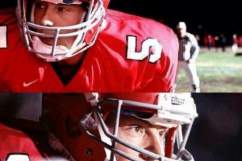 WATCH: ‘I’ll Stand By You’ – Amber Riley on ‘Glee’ Tribute to Cory Monteith 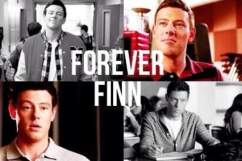 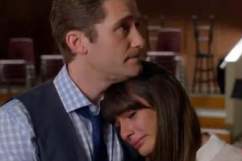