The Fifty Shades of Grey movie has a new leading man by the name of Jamie Dornan. Dornan, 31, will be replacing Charlie Hunnam as Christian Grey in the film. Check out these 5 Facts on the actor.

Sorry, ladies, but the new Christian Grey is not single. In fact, his wife is an actress and singer named Amelia Warner, 31, who was once married to actor Colin Farrell. They were married in July 2001 and broke up just a few months later, but apparently the ceremony wasn’t exactly legal. Mr. and Mrs. Jamie Dornan were married this past Spring in a country house in Somerset on April 27, 2013. The newlyweds are currently expecting their first child together, which was confirmed this past June.

Oh, and Amelia isn’t the only singer in the family. Jamie Dornan can sing as well and actually used to be a part of an Irish folk duo called “Sons of Jim.”

According to Radar Online, Dornan dated famous actress Keira Knightly from 2003 to 2005. Apparently, the two met on a photo shoot in New York City and kept their relationship a secret for a year.

Dornan was a model at the time and has worked for several Calvin Klein campaigns with Eva Mendes and Kate Moss. He was also the face of a perfume Dior Homme campaign.

3. His Great-Aunt Is a Movie Legend

"I wish I could tell you my age but it's impossible. It keeps changing all the time." Greer Garson (born on 9/29) pic.twitter.com/Zr5i3nrLzR

Acting runs in Dornan’s blood as his great-aunt is Greer Garson, movie legend. Greer Garson actually won an Oscar for Best Actress. Strangely, Dornan wasn’t aware until he was 13 years old that she was his great aunt, so he wrote her a letter. Two days later, Garson passed away.

Dornan has previously appeared in the movie Marie Antoinette and has acted on TV shows Once Upon a Time and The Fall. Aside from Fifty Shades of Grey, he has another movie called Flying Home that’s coming out in 2014.

4. Dornan Is an Ireland Native

Many people ask why I support Manchester United? I'm from Belfast, so was the incomparable George Best. Simple as that pic.twitter.com/4c2hkkSj

Dornan’s wife Amelia must have a thing for Irish men. First Colin Farrell and now dreamy Dornan … both Irish actors. Dornan even played a “serious level” of rugby for a time and he’s a huge Manchester United fan.

Dornan was born in Holywood, County Down, Northern Ireland to his parents Lorna and James. He has two older sisters, and two Methodist lay preachers as grandparents. His father, who also considered acting, is an obstetrician according to Wikipedia. Dornan attended the Teesside University, but dropped out and moved to London to train as an actor.

5. Teen Years Were Hell for Dornan

When Dornan was 16 years old, his mother died of pancreatic cancer. A year after the passing of his mother, four of Dornan’s friends were killed in a car crash. The actor was quoted saying:

I had a terrible time when I was 16,17. Therapy got me through that, actually. I’m not sure how I would have coped without it. 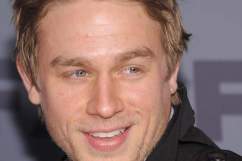