Beloved Bieber seemed to get caught in a nightclub brawl in the Dominican Republic last night. MediaTakeout reports that the star “snuck into” the Jet Set Club and a fight broke out when Bieber’s bodyguard began to push club-goers. The media source was told that Justin Bieber was struck once in the jaw during the fight before being “whisked out the back door.” Watch the video footage and judge for yourself if the Biebs took a hit. 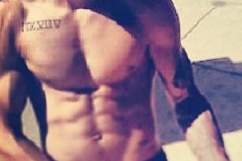